Home Blog 11 Reasons Why Studying in the UK is Still Popular for Int’l... 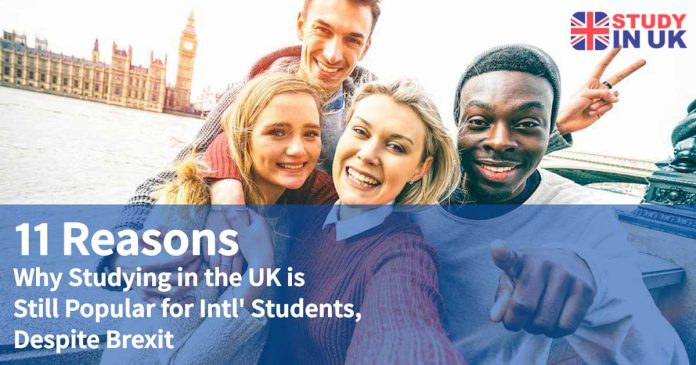 With about six weeks ahead of Brexit, all sectors in the UK are doing everything possible to be as ready as they can in order to feel the consequences of Brexit as little as possible. Despite that 52% of the UK universities that participated in a survey conducted by UK Universities claim they are “very” or “fully” prepared for Brexit while the rest were slightly prepared, the education sector, in particular universities still fear that Brexit will affect the demand of international students to study in the UK.

However, listed as the second favorite country in the world after the US, enrollment of international students at UK universities has yet not been affected despite the referendum in 2016, and the chances for this to change after Brexit are low.

The reasons why the UK remains such a popular destination for students are many, but Studying-in-UK.org higher education information portal has listed 11 reasons why studying in the UK is still popular despite Brexit including quality universities, the huge international student population, opportunities to work in UK post-graduation, and many others.

It does not matter if a student is planning to return to his/her country of origin, continue living and working in the UK, in another EU member country, in the US, in an Asian country, or anywhere else in the world, upon graduation at a UK university. The UK universities and qualifications are recognized all across the globe.

No UK student will ever have the problem of being rejected because their university or qualification is not recognized, as it happens in many countries.

This is due to the quality of UK universities, which are consistently ranked among the first positions in world university rankings. The UK also has a reputation for some of the oldest universities in the world, which have preserved and upgraded the quality of study and research.

The application for any UK university can be made through the Universities and Colleges Admissions Service (UCAS), which is an independent admission service that facilitates the application procedures. Aside from the online application, students need to submit commonly required documents such as a certificate of graduation, academic transcript, certificate of English proficiency, reference letters, etc.

Students Are Permitted to Work

International students enrolled at a full-time undergraduate or postgraduate degree course in the UK are permitted to work for a maximum of 20 hours per week during school term, and full-time during holidays.

Of course, students should always consult with their university before getting a job, to make sure all rules are respected.

Students planning to finance their own studies working half time, should be aware that the money they get from working will not be sufficient to cover study and living costs in the UK. Moreover, when applying to get a UK student visa, applicants are asked how they plan to financially support themselves, and working half time in the UK is not accepted as a way.

Once a student gets the letter of acceptance from a UK University, he/she can continue with the procedures of applying for a UK student visa.

The application procedure for a Tier 4 General Student visa consists of a few procedures, including collecting several documents, attending a visa interview, paying a fee, and then waiting for the processing of the visa application.

The thing is that, once admitted at a UK university, in particular if it is a highly ranked university, the chances to have a visa application rejected are extremely low.

It Is Easy to Find Accommodation as a Student

Even though it may be a little scary for youngsters to leave behind their own country and starting a journey with new challenges in another country, finding accommodation in the UK should not be a huge concern.

Usually, first-year students can live in university dormitories, and then, once they have made friends they usually rent rooms or even flats together with them. Finding these rooms and flats is not very difficult, as there are tons of online websites that help with that. One can even check the opinions and ratings of other students who have resided in those particular places.

Studying in UK is Affordable

As most of the bachelor studies in the UK take three years, this means fewer fees to pay, making it more affordable than 4-year study programs. The costs of life in the UK can be expensive, but due to the high salaries, they are reasonable. However, for students who are not huge spenders, life in the UK is cheaper than those who wish to party and travel and eat at fancy restaurants, as basic living expenses are not very high.

UK Is a Safe Place

Living in the UK is very safe. In the list of world countries, from the safest to the most dangerous, the UK is ranked 33rd out of 162, what makes it a very safe county.

The overall risk is very low, while the only high risk is from pickpocketing, in particular at favorite destinations for tourists. Mugging and scam risks are medium, while natural disaster, transport and taxis risks are very low.

There’s a Huge International Student Population in the UK

The UK has a huge student population, which has continuously been growing throughout the years. In 2017/18, there were 458,520 international students were enrolled at UK universities in different cities as Newcastle, London, Liverpool, Manchester, Glasgow, Brighton, Sheffield, Leeds, Cardiff, Bristol, etc.

According to statistics, 142,715 of these students were non-UK EU citizens while the rest were third-county nationals. 247,685 of the overall number of international students in the same year were new enrollees in the UK.

Students Easily Get Adapted to British Culture and Social Norms

As the English language is commonly taught as a second language at schools outside the UK, most international students wishing to study in the UK have learnt the language since an early age. By learning English, usually students get to familiarize with the British culture and social norms.

Moreover, due to the numerous shows and movies located in the UK, and the rich British literature, most students heading to the UK are already familiar with the British culture, thus having it easier to adapt with their new life.

The UK universities have some of the highest student satisfaction ratings. With study fees lower than many other world countries, highly rated qualifications, providing students with learning opportunities, academic support, assessment and feedback, learning resources and communities, the reasons why they are rated this high are endless.

The UK government has already announced that the 2020/2021 intake of students will have the chance to stay in the UK for another two years and work through the new Post-Study Work Visa. The policy will replace the current one that permits graduates to stay for only four months after they finish university.

The new visa will be granted only to those who successfully complete their studies and that have a valid leave to remain at the time of visa application. Through the new graduate route, the UK intends to lure “the world’s brightest and most talented” to stay and work in the UK.